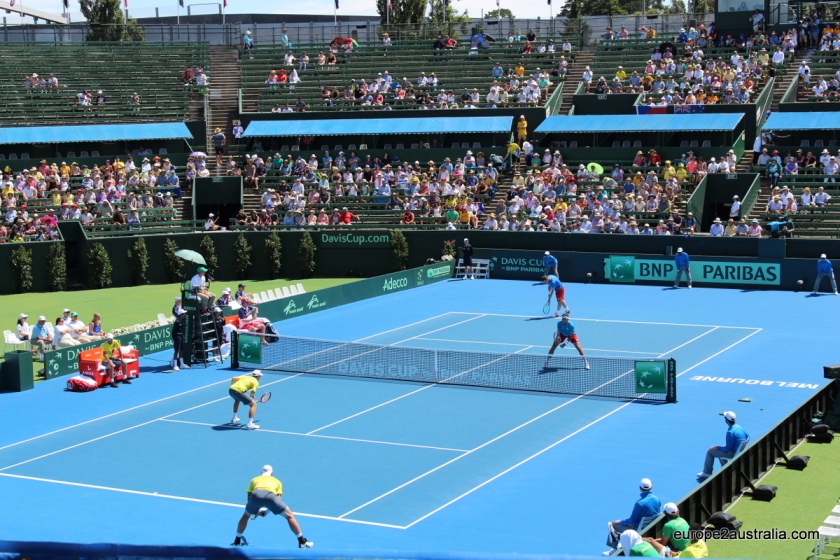 If you get the opportunity to go and watch a world cup game, why not take it?

After the summer holidays, school has started again this week. Yesterday Kai came home with eight official looking tickets in his hands for this weekend. I thought it would be for a random game, but it said Davis Cup. Even for a tennis new-bee (that is me) that sounded familiar.

So we changed all our plans in order to go and see the matches. The doubles were today and started at 12.00 p.m., gates would open at 11, but since Kai and Luka had to go to Dutch lesson in the morning we could not make it that early. But if we hurried it would be possible to get there without missing too much. For Australian standards way on time anyway.

The train into the city always drives past the Kooyong stadium, so we have seen the tennis courts many times before, but it was always from a moving train. This time we got out in Kooyong and walked to the stadium. This place has a lot of tennis history, dating back to 1892 and that is clearly visible. It is old, but classic, it almost felt like we traveled back in time.

The yellow crowd opposite us on the right side was the cheer squad. They jumped up and started singing every time Australia scored a point or hit a really nice shot. They were very busy!

The seats were basic benches. I can imagine that apart from new paint layers they have been this way for years and years. All part of the charm of the place though. 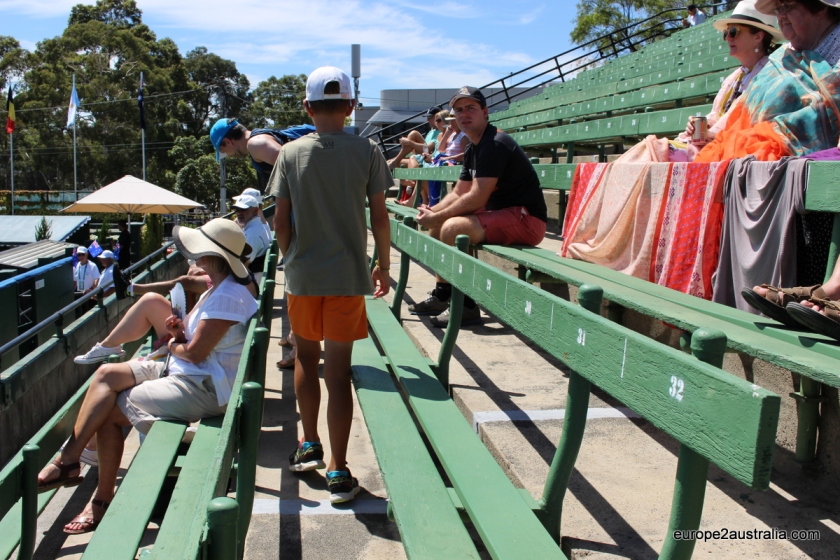 We expected the stadium to be packed, but it was only about half filled. Maybe it had something to do with the 38 degrees that we are having here today. It was already exhausting to sit there and watch the game. Of course the Aussie players were wearing hats and sunglasses, we wondered why the Czechs were not. Or maybe we have become to Aussie already, “no hat, no play”.

They were playing best of five, but were done after three sets. Lucky for us, as it was very hot.

It turned out that John Peers (playing on the left in yellow) was one of the doubles players in the Australian team. His mother Elisabeth Peers is head coach at Kai’s school. John won the doubles at the Australian Open and is currently the best Australian doubles player and is ranked 6th in the world. He might come to visit the school on Monday, so that will be exciting as well.

Thanks Elisabeth for distributing these tickets and giving us this opportunity!

3 thoughts on “At the Davis Cup”