As we have written before, the kids are keeping up their Dutch through lessons on Saturday. Usually, these are two hours long, and Willemijn and I take a walk on the beach to pass the time. However, once in a while we miss a weekend lesson and, as catch-up, Kai and Luka do Double-Dutch …lesson, that is.

The “downside” to this is that Willemijn and I usually end up at the mall, which is an expensive way to while away four hours. And yesterday was no exception.

With a number of holidays looming, most of which in areas of great natural beauty, we were strolling past some camera stores, when one of those fancy quad-copter drones caught our eye.

Wouldn’t that be cool to take along?

Well, long story short, after contemplating over a large cappuccino (this is Melbourne, after all) and doing some online research in one of the electronics stores, we decided to spend a significant part of my bonus on a Dji Mavic Pro.

Once we were back home, and the batteries were fully charged, we headed out to the oval next to Luka’s school to try out our new toy. Kai especially was very hyped – he has been eyeing RC cars for the last few months, and now having an RC drone in the house is his dream come true. Too bad stupid dad didn’t let him fly on day one. 🙂

But before we could even take off, the machine demanded a 200MB firmware upgrade. I guess I should have expected that and installed the Windows tool at home. So our lift-off was delayed by almost 30 minutes while the software did its thing.

With light running out and the batteries almost empty, and friends coming over for dinner we called it a day. Still a lot to learn.

Today, with better weather, we decided to head back out. This time the kids did get their turn, even if it was just around the oval again. Still, they really enjoyed themselves.

We played around with the new toy for almost an hour before both batteries were drained. I get the feeling we have barely scratched the surface of the possibilities – I am still using the “beginners” setting on the device. So we’ll put in some more practice before the holidays.

Speaking of holidays: how do you transport this thing? Well, on the website you can buy a special bag for more that AU$ 130,-. And even Gumtree (our friend) wasn’t much help.

But, as luck would have it, we still had some old lunch bag/boxes that Willemijn had bought, but the kids never really adapted. They work out really well…

3 thoughts on “Boys and their toys” 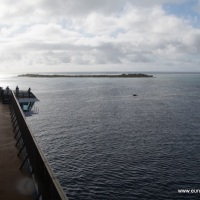