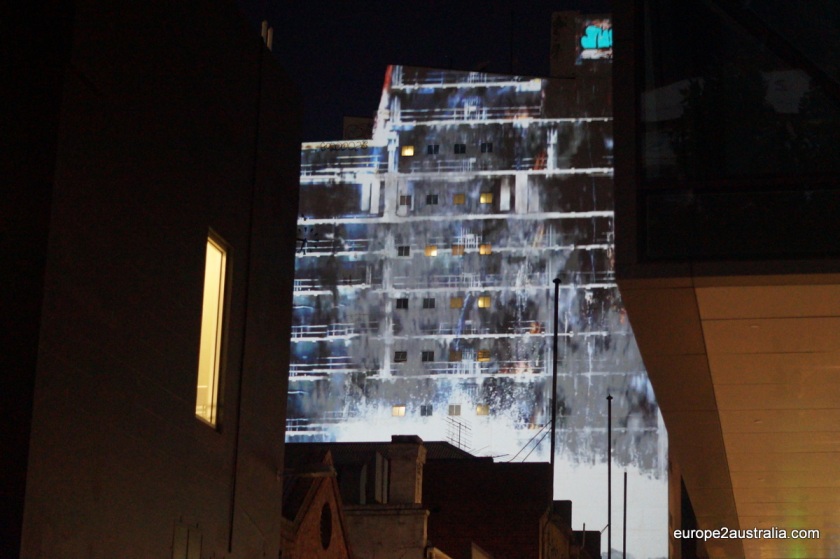 Melbourne is known in Australia for its many festivals. And, indeed, if you check the relevant websites, there is something to do almost every weekend of the year.

But one of the really big ones in White Night Melbourne. It’s a music and arts street festival, for one night of the year, starting at 7pm and lasting till 7am the next morning. It takes place on and around Swanston Street in downtown Melbourne, which is completely blocked off for all traffic (including trams).

I heard about this festival from one of my colleagues at work. And since the kids are now getting to an age where they don’t need to be in bed by 7pm, we decided to give it a shot.

We started our evening at the AAMI, where they had some interesting workshops about handwriting, fonts and typeset throughout the ages. Unfortunately for me, the rest of my family does not share my enthusiasm for these topics, so it was a short stay, and we soon made our way back to Flinders Street station.

Swanston Street was not only packed with people, but every few meters there was another street performer doing his or her thing.

From a duo of beat-boxers (is that how you call more than one?) to living statues, there was something for everyone.

But what White Night is best known for is the light projections on some of the more famous buildings in Melbourne (or the ones that have a nice, big, white wall).

These go on throughout the night and are the real people magnet.

After two hours of lots and lots of input, both Kai and Luka were thoroughly exhausted, so we made our way to Melbourne Central and took the train back home. – And good thing, too. By the sheer amount of people in the packed trains that were still traveling in the opposite direction, it just got busier and busier.

So, even though we did not stay quite as long as I would have liked, it was quite the experience. A great atmosphere in the streets, nice music, laughing people and a lot of fun all round. We will be back next year! (But then maybe in the very early hours of the morning.)