It’s Luka’s birthday today. And with birthday, you have presents. We tried to convince Luka that this year, we’d turn this around and she would give us presents. But somehow that idea didn’t fly with her.

So, back to the drawing board. What do you give your 8-year-old daughter who already has everything?

That was a tough one. We spent quite some time bouncing around some ideas. Like more Lego. Or a doll. Or pens and paper. Or… But none of that really appealed.

And then, one day, we had an idea. What about a trampoline? Both Luka and Kai really enjoy bouncing around on them whenever they get a chance. And the grandparents preferred sending money for presents anyway, so we can get something for the kids. Why not put that all together to good use?

The decision was made. We’d buy a trampoline. But which one? And where to buy it? And, maybe most important, where do we put it?

That last one was easily answered: next to the carport. Leaves only the question of size. After several nights with a measuring tape and intense discussions we settled for a maximum size of 10 feet diameter.

Willemijn started to talk to her friends and gathered some first-hand feedback. A very popular model around here comes from Springfree. The unique thing about them is the fact that they don’t have springs around the mat but rather beneath them, allowing for maximum bouncing room. Unfortunately, the other unique thing about them is that they cost about two to three times that of a normal trampoline.

We turned to our trusted friend in such matters: Gumtree. Turns out that even used ones are still a good few hundred dollars more expensive than new, “traditional” trampolines. Plus, some further research revealed, setting a Springfree for a second time is not always easy, and replacement parts are expensive, too.

In the end we decided to go with a more traditional setup, and get a brand new one.

Finding one of those also turned out to be a bit of a challenge. After visiting Gumtree (most of the ones there were really used), Harvey Norman (not a very sturdy first impression) and several other places, we still couldn’t make up our minds.

That’s when we found Big Air Trampolines. They had a good range, OK-ish prices and good reviews. So that’s what went with. Ordering online, we had the packages arrive within a week. Which was lucky, because all of the deciding and searching had taken us very close to Luka’s birthday. 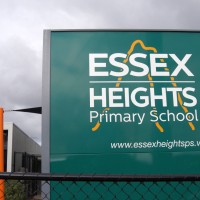